What is Bands for Brains?

Bands for Brains is a virtual fundraiser concert to raise money for brain injury research. The concert takes place on May 15, 2021 at 7 p.m. EST on the Bands for Brains youtube channel. Please note that even though this concert is ticketed, it is free to attend! Remember that it is also fundraiser, and donations are greatly appreciated! The event is organized by Riley, a high school junior from the greater Baltimore, Maryland area. Riley is not only a music lover, but has a personal experience regarding brain injuries. Riley’s mom acquired a traumatic brain injury in 2015, and she remains in a minimally conscious state. All revenue that this event creates will be going directly to the Brain Injury Association of Maryland (BIAMD). We’ve brought together some amazing musicians who have generously contributed their time and their talent, and they will be performing some really great sets curated just for this show. So come and listen to some great music, for a great cause!

A Message From Riley

Please keep in mind that I am working hard to stay mostly anonymous. If you know me, please respect my wishes to remain private and do not disclose my identity. Thank you.
Click to Support B4B 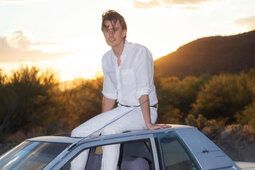 ​DOGBRETH
​Dogbreth is a vehicle for the intimate and often tender guitar-driven power-pop of Arizona songwriter Tristan Jemsek and an ever-revolving lineup of friends.

​SARCHASM
Sarchasm are three introverts with lisps of varying severity and radically different coffeeshop orders, unified by their love of superheroes, burritos, and ugly button-up shirts. They make music about mountains and friendships gone wrong. Berkeley based indie band Flamango Bay is Bodhi on bass, Dash on drums, and Georgiea & Ikaika on guitar and vocals.  Their music is influenced by the diverse music background of the members, ranging from jazz to rock to R&B.  Flamango Bay has been performing together since 2015.

​Old Eastern was formed in early 2012 in a basement out in Baltimore MD. In the many years since those days, a lot has changed. One thing however, remains the same; This whiskey-rock Baltimore band known as “Old Eastern” is on a mission to break some ear drums

​BANDS FOR BRAINS IS SPONSORED BY

Would you like to join the cause as a Donor or Sponsor?

​Want your family, group, organization or company featured
on our website, social media, and showcased during the concert?

Consider becoming a Bands for Brains Donor or Sponsor!

Here’s how to do it: